While most of us use our clothes dryers at least once a week, we rarely think about their potential to start a fire. According to a recent U.S. Consumer Product Safety Commission Residential Fire Loss Report, there are more than 5,100 clothes dryer fires annually. Although faulty appliances are sometimes to blame, improper venting is the number one cause of dryer fires. Dryer lint often acts as an accelerant, increasing the fire damage and smoke damage caused by a dryer fire. We look at the causes of dryer fires, common warning signs, and what do if you have a dryer fire.

How Your Dryer Dries Clothes

Most standard clothes dryers are tumble dryers that use warm air to dry wet clothes. Either an electric element or a gas burner warms the air in the dryer. That warm air is then blown across the clothes as they tumble around. The warm air causes the moisture in your clothes to evaporate and the moist air is then vented through the exhaust ductwork.

Your dryer exhaust ductwork then needs to be vented to an exterior space, typically through a window or wall in your laundry room. If your dryer is not vented properly, it will cause moisture to build up in your home. This could allow mold to grow or even cause water damage to flooring, walls, or ceilings.

What Causes a Clothes Dryer Fire

Most clothes dryer fires are caused by improper ventilation ductwork mixed with the accumulation of lint inside the unit. Not only is lint flammable, but a lint build-up reduces airflow. Due to the reduced airflow, your dryer doesn’t cool naturally. As the mechanism warms up, it increases the potential for shorts and sparks.

Whether the result of the unit overheating or a spark, the dryer lint can catch on fire. Lint in your dryer will catch on fire first, but it can spread to lint in the exhaust vent quickly. The more lint, the bigger the fire. Eventually, the clothes inside the dryer or parts of the unit itself will burn. From there the fire can spread to other areas of your home.

1. Clean the Lint Trap After Evey Use

Due to the risk of a dryer lint fire, you should clean the lint trap after every load and check that it is empty before drying another load. Every few months, you should thoroughly vacuum out the lint trap with a hose attachment. If the lint trap becomes clogged, it may cause your dryer to overheat and can even start a fire.

2. Check the Filter on Rear Every Few Months

Most dryers also have a lint filter on the rear of the unit, where the dryer vent connects. While this doesn’t need to be cleaned as much as the lint trap, you should check it every few months. Like the lint trap, a clogged filter can cause the unit to overheat and start a dryer lint fire. Use a vacuum with a hose attachment

3. Clean the Dryer Ductwork Every Year

The dryer ductwork allows moisture and exhaust to ventilate. Over time, the ductwork can get clogged with lint and other debris, especially if you are lackadaisical about cleaning your lint trap. In the event of a fire, the lint build-up may cause the fire to get out of control. Use a vacuum with a hose attachment to remove the build-up at least once a year.

The vent exhaust hood on the outside of your home can also build up lint and other debris, preventing exhaust from flowing properly. You should clean the exterior dryer vent at least once a year. Exterior vents may also have a filter as well. Clean both with a vacuum with a hose attachment to prevent a dryer lint fire.

While you may be tempted to fill your dryer completely, overloading it can cause it to work harder and build up heat. This is likely to start a clothes dryer fire if the lint trap, filter, or ductwork are clogged.

6. Avoid Using Your Dryer When You Are Not Home or Sleeping

Most of us take our dryers for granted, assuming they are completely safe. While they are generally safe, you should never start your dryer before leaving your home or going to bed. You should also install and regularly test both a smoke alarm and a carbon monoxide detector near your dryer.

While accordion-style ducts made of foil, vinyl, or plastic are extremely common and inexpensive, they actually pose a greater risk of fire. Because of the ridges in the ductwork, they are more likely to allow lint and other debris to build up. Rigid metal ductwork is safer because there are fewer places for lint to collect.

8. Use the Right Materials

Ideally, you should use a 4-inch diameter rigid metal vent pipe for your dryer ductwork. Avoid using screws when installing your ductwork, as screws will collect lint and reduce airflow over time. The exterior exhaust hood should be at least a 4-inch by 4-inch opening with 16-square-inches of surface area. This ensures the least resistance and promotes airflow.

9. Minimize the Length of the Exhaust Ductwork

You should always use the shortest possible ductwork length and limit the number of bends when venting your dryer. This promotes airflow and reduces the likelihood of lint buildup. The maximum recommended length for exhaust ductwork varies depending on the material of the ductwork, the number of bends, and the specifications of your dryer model. Review your operation manual for the optimum length of dryer ductwork. If necessary, install a dryer duct booster to improve the airflow and ventilation of your dryer.

Leave enough room behind your dryer for the ductwork and avoid kinking or crushing it. This will restrict air flow, reducing the efficiency of your dryer and may lead to the unit overheating. If you want the dryer flush against the wall to save a few inches, consider installing a recessed dryerbox in your wall.

11. Vent the Dryer Outside

The dryer ductwork should always vent outside. Never vent your dryer to the basement, crawlspace, attic, or any other interior space. Not only can moisture vapor lead to mold, but the exhaust may contain carbon monoxide. Heat recovery diverter valves and termination boxes no longer comply with current standards and should be replaced as soon as possible.

12. Have the Unit Professionally Serviced

Whether you have a gas or electric dryer, you should have your dryer professionally serviced every few years. A professional inspection will ensure it’s working properly and prevent dryer fires. 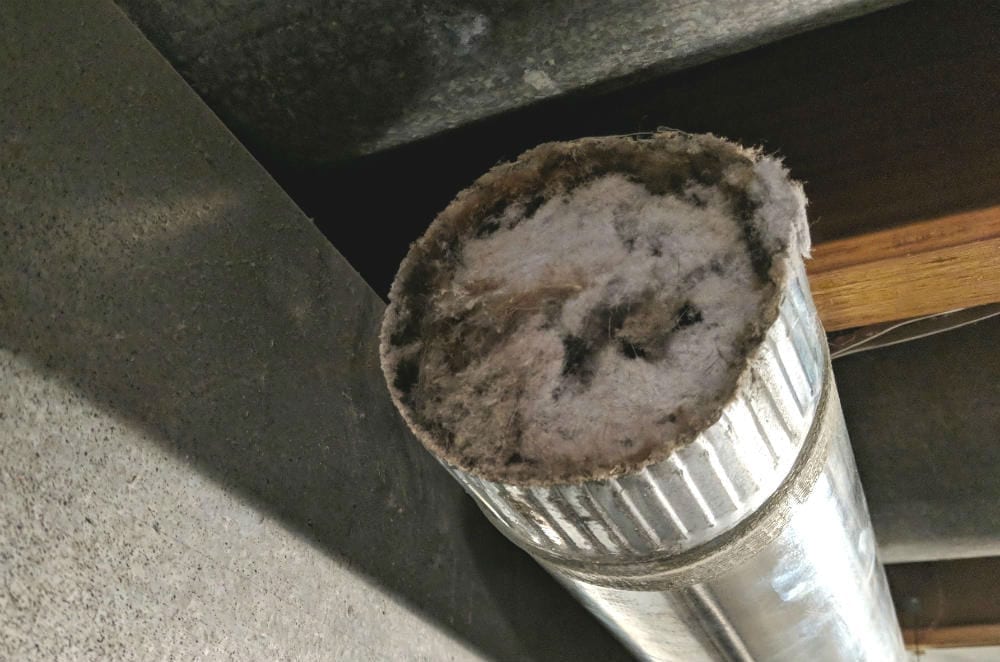 Example of a lint blockage in the dryer exhaust ductwork

Signs Your Dryer Could Start a Fire

The biggest sign that your dryer could start a fire is slower than usual drying time. If you find yourself having to dry loads more than once to get them completely dry, clean the unit to prevent a dryer lint fire. Thoroughly clean your lint trap, filter, ductwork, and vent to remove built-up lint.

Another cause for concern is if clothes feel hotter than normal or have a smokey smell when they come out of your dryer. This could indicate that the unit is overheating or creating sparks that may cause a clothes dryer fire.

In addition to smokey odors and excessive heat, other signs of a potential dryer fire are unusual noises, sparks, and smoke. If you notice any of these signs, stop using your dryer immediately and contact a dryer repair company for a complete inspection.

For many years, dryers were almost exclusively located in the basement near an exterior wall. This typically allowed for dryers to vent out of a nearby basement window, limiting the length of the ductwork to around 10 feet.

Unfortunately, the laundry rooms in many new homes are located in interior rooms. This leads to having extremely long ductwork runs with more bends and turns. This can reduce dryer efficiency, leading to longer drying times. Lint is also more likely to build up, which could eventually cause a dryer lint fire.

If your dryer is not located near an external wall, we recommend that you have your dryer serviced every year or two. A professional dryer cleaner will be able to vacuum out the ductwork and as well make recommendations to improve efficiency, prevent lint build-up, and limit the risk of a dryer fire.

While the majority of dryers on the market are heat-based tumble dryers, there are a number of alternatives that use other methods to dry your clothes. Most of these alternative dryers do not require venting, which significantly reduces their risk of starting a dryer fire. Here are a few of the most popular alternatives to conventional tumble dryers:

A spin dryer uses a centrifuge to extract water from clothing and fabrics. While they can save time and energy over traditional tumble dryers, they don’t always completely dry your clothes.

Work similarly to condenser dryers, but they use a heat pump to dehumidify the air. While they use as low as half the energy as a condenser dryer, they require specific temperature and relative humidity levels to properly dry clothes.

Mechanical steam compression dryers are an advancement on heat pump dryers, using high temperatures and pressure generated by steam to actually force water from your clothes. They are often twice as energy-efficient as traditional tumble dryers.

Clothes are hung vertically in convectant dryers and a heating element at the bottom of the unit allows air to slowly warm and dry the clothes. While relatively energy-efficient, they are only marginally faster than line-drying clothes.

Solar clothes dryers use the sun’s energy to dry clothes without directing sunlight to the clothes. In some cases, the solar heating box is used to heat air for a conventional tumble dryer.

What to do if a Dryer Lint Fire Causes Fire Damage

A clothes dryer fire can significant fire damage to your home, weakening the structure of your home or leaving permanent smoke and soot stains. The smoke and fire restoration professionals in the Restoration Local network are trained in the proper procedures to clean and restore your home or business after a fire.

Jeff Rooks writes restoration content that helps homeowners restore their lives after a disaster or accident. Most days, you can find him cycling through Tampa. He also enjoys exploring new and delicious food and beverages around the world. 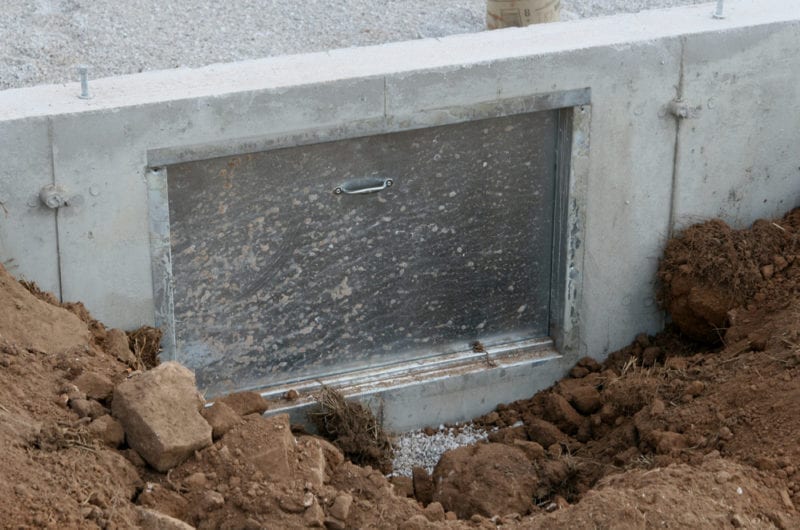 How To Remove Water In Your Crawl Space 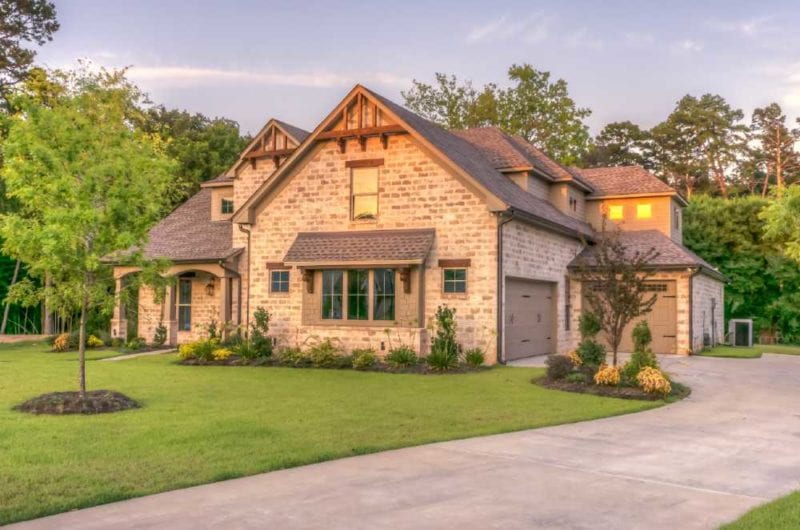 How To Find Out If Someone Died In A House 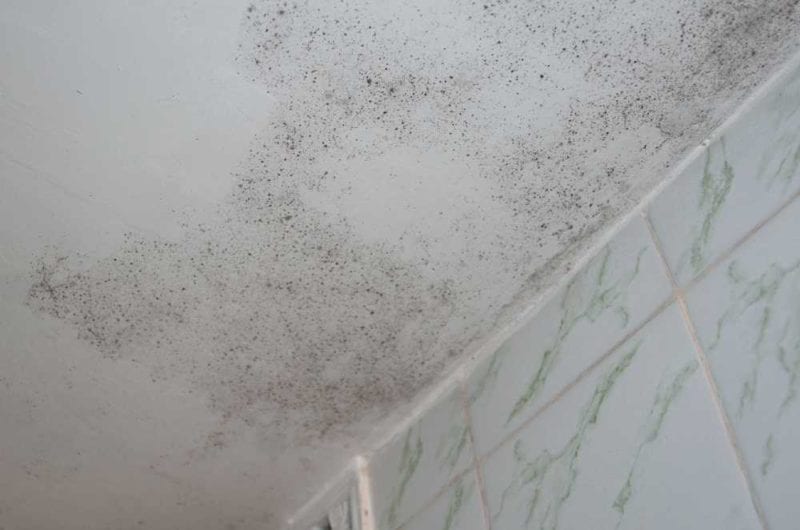 When To Hire A Mold Remediation Company

We Work With
All Insurance!

It takes time and the right equipment to clean up any type of residential or commercial damage. Restoration Local® connects homeowners and property managers to the largest network of restoration companies and disaster mitigation contractors in the country.

With thousands of restoration companies covering 95% of the continental United States, it couldn’t be easier to find an experienced and reliable contractor in your area. You can even read reviews from other customers who had similar issues.

Change Location
To find awesome listings near you!